The Art of Ping Pong

The Art of Ping Pong

Fivefootsix launched  this project in 2013, collaborating  with some artists to raise money for children in need. This project is based on the creation of designed Ping Pong batts that later on are sold in an auction.

The students from level 5 and 6 from the Visual Communication cluster at London Metropolitan University had the opportunity to pick one student to be listed on the history of this event.It all started with a brief (of course) given by our tutors before the beginning of the year, and attached to it were all the files to work.

First of all, every student had to produce four different designs, from which we had to select the one we liked the most, so I chose this flipflop inspired one:

This flipflop itself has personal meaning from my expieriences because pingpong, something that I am confortable with, go against my weakness, walking with fliflops when I had my feet valgus ( pointing in different directions). The sound can be also considered as a similarity.

The three most voted ideas had to be produced on a real paddle so I started to collect the materials to produce it.

I started to create the base in both sides using Plastazote ,which is a kind of spongy paper that can be shaped with heat , with a metal fence, I place both on the oven and for each mm of thickness I let 12 seconds inside,  so that the material melts and get the shape of the fence ( Conviniently pressed after taken from the oven).This was the result:

After was time to start painting the handle and the straps, so with acrylic and latex I made the ink and I drilled the straps and the handle inside. However wile they were drying I noticed that bubbles were coming up and some excess of Ink made it irregular, so I had to take it of and re do it but this time with a color spray. This time the both parts painted were soft and regular.This is the difference 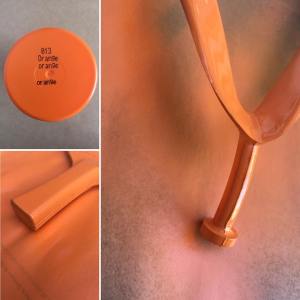 In the mean time the holes on the bat and on the Plastazote were done. 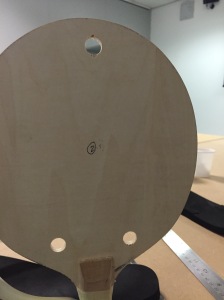 Everything was ready to put in place , with the use of spray mount I glued the plastazote on the bat and placed the straps on the holes, which I can say that was really hard so at the end I had to cut the straps and mount them separatly . At the end yhis was the outcome.

Now is time to wait and hope that I can raise some funds fore Children in Care.